skip to main | skip to sidebar

We have completed another day of the US Amateur West Championship. We have 160 players participating in 3 main sections, 3 scholastic tournaments and various other side events. But with just one more day, the games are starting to get more tense!

The scholastic section completed another 1-day event. Twenty-one players in the K-6/U1000 tournament participated. Leading the way was Alexander Vogel who scored 3.5 - .5 points.

GM Alejandro Ramirez has been here all weekend analyzing games for the players. This afternoon, he also put on a simultaneous exhibition back taking on 12 opponents at once. Derek Chen (1671) was the only blemish on Alejandro's record of 11 wins, 0 losses, and 1 draw. Derek received a complementary entry into the Ye Olde Pueblo for his effort. 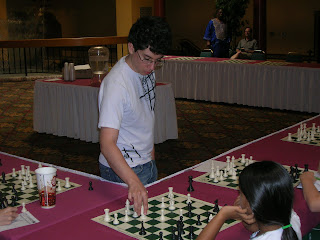 Tomorrow is the final day as we wrap-up with rounds 5 and 6 in the main tournament and the final scholastic tournament of the weekend. 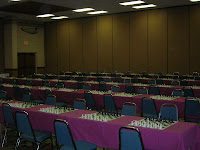 The US Amateur West is underway! We have over 160 players signed up for this weekend's events. We started off with the Friday Night Blitz event. Ashu Thakur and IM Levon Altounian tied for first. There was even a rare Enrique Huerta sighting. Who knew he could play chess? (Editor's note: I saw his games, there's still debate as to whether he can play chess.) 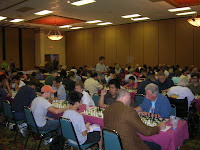 US Amateur West this weekend!

The US Amateur West is this weekend, May 29 - 31, at the Holiday Inn on Palo Verde. The tournament is a 6 round event open to players rated 2199 and below (USCF). There will also be three, 1-day scholastic tournaments (4 rounds) open to players in K-6 who are rated below 1000 USCF.

Free entry to the National Open to 1st place in Championship and Reserve sections.

Scholastic Sections: (each day) Digital clock + trophy to 1st. Trophy to 2nd-5th. Trophy to Top U800, U600, Unrated. Perfect scores that don’t win the clock will receive 1 yr. of USCF Membership.

Other Prizes: Top 2 Family Pair in the non-scholastic sections. Biggest Upset of each round (Championship, Reserve, or Booster only). Chronos clock to Scholastic player with highest combined score for all three 1-day tournaments.

There is still time to register for the event. Just go to the SACA webstore and register there, or print out a flier and mail in your registration. But hurry! Because the entry fees go up on Wednesday!

Grandmaster Alejandro Ramirez returns to analyze your games between rounds. Additionally, he will also give a simul on Sunday. The simul is open to all players, not just those playing in the event. Space is limited, so be sure to reserve your seat early.

We look forward to see you this weekend!
Posted by EJ at 5:45 AM 1 comment:

For those of you that have been to the Gaylord Opryland Hotel for chess tournaments, this footage is shocking.

Many Tennessee counties are being declared disaster areas as rising flood water is causing damages estimated to be in the billions.
Posted by EJ at 4:15 PM No comments: